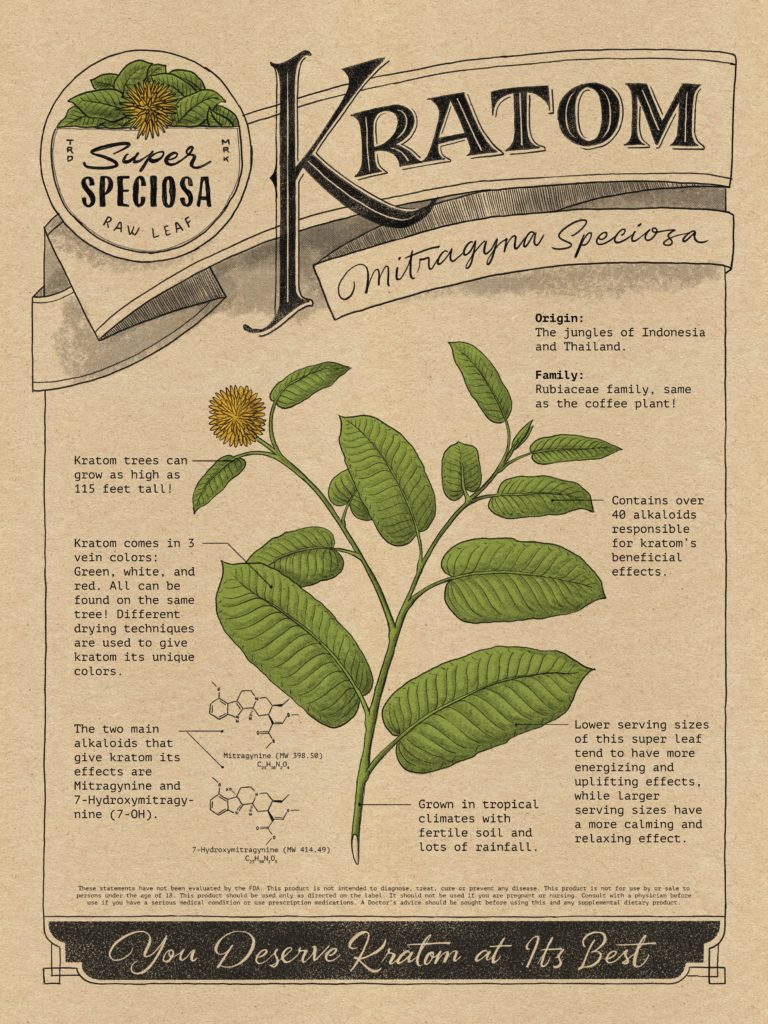 People native to Southeast Asia have utilized kratom for centuries, but its use has exploded in the United States over the last couple decades. With its rising popularity in the West, you can now find tons of information on the internet about kratom, but how can you tell what’s real from what’s fake?

No need to worry: the kratom mythbusters at Super Speciosa are here to give you the facts.

With so many kratom strains out there, you may be wondering: “how do I choose the strain that’s right for me?”

Some kratom vendors have over 30 strains in their shop, making it confusing or difficult to find one that fits your needs.

The truth is that the word “strain” is a misnomer when it comes to kratom. There still needs to be more research done on whether different harvests, locations of the trees, and the maturity of the trees give the final product different effects.

When it comes to harvesting the kratom, there is no set quality control that would determine what strain each batch is. Therefore, seeing kratom vendors carry an excessive amount of strains, or claiming that certain strains produce specific effects, may be a red flag. For example, you may see a vendor claiming “Red Borneo is good for sleep, and Green Brunei is good for energy,” when in reality, they are most likely using one batch to create multiple strains.

Furthermore, the geographic location used in certain strain names does not determine where the kratom comes from. Most kratom imported into the United States comes from Indonesia, specifically rural villages by Borneo. You may see vendors claim that their Thai, Bali, or Vietnam “strains” are grown in those specific regions, which is not true.

But what about vein colors? Vein colors come from the claim that different strains, growing techniques, and harvesting and drying methods create different colors of the actual kratom powder. In the kratom market, you may see the three main vein colors: red, green and white.  Different drying techniques usually cause the slight color variations. Now, other vein colors have popped up within the market, such as yellow, purple, rainbow, gold, and silver. There is no scientific evidence that shows these new colors are tied to a specific effect.

The categorization of vein colors can also be misleading, because most of the time, all vein colors can be found on the same tree! The variances in color are simply due to the harvesting techniques. Indonesian farmers don’t even sort their kratom based on vein color. When kratom is left in the sun, you will see that it gets noticeably darker, creating a “red vein strain.” This is how harvesters create the different vein colors.

At Super Speciosa, we categorize our “strains,” or varieties, by mitragynine content and the variations of color. Our Super Speciosa is the highest testing strain, always guaranteeing above 1.4%. The Maeng Da (regardless of color) will test higher than 1.0%. The rest of the varieties usually test over 1.0%, but can be as low as 0.5%. Green varieties are the lightest green in color and red is the darkest. White is usually in between, but may be just as dark as red. Learn more about strains here.

Kratom does not get you high. In fact, kratom can be compared more to a cup of coffee or a preworkout supplement. Natural kratom does not get you high. There have been adulterated kratom products that falsely gave people the impression that kratom gets people high (kratom products mixed with illegal drugs). Kratom has also been compared to synthetic cannabinoids (which are used to get people high). Based on everything we have observed, most kratom users are using kratom because it helps them manage their well being, not because it provides a euphoric effect.

Myth #3: Kratom is a synthetic drug.

This is a common misconception where kratom is rumored to be a synthetic or designer drug, which is far from the truth. Kratom is commonly sold in gas stations, smoke shops, and convenience stores, and several years ago, it was sold alongside harmful synthetic substances. This gave kratom its bad reputation, and legislatures tried to push to make kratom illegal.

Kratom is an all-natural plant, botanically known as mitragyna speciosa. When you purchase kratom from a certified, reliable source, such as Super Speciosa, there are no additives, no fillers, and no synthetics, just pure kratom leaf.

Myth #4: The kratom industry has no production standards or consumer safety protocols.

The American Kratom Association (AKA) set forth the AKA Good Manufacturing Practice (GMP) Standards Program. This means that these companies abide by strict GMP standards set forth by the Food and Drug Administration for dietary supplements. Super Speciosa was one of the first companies to be certified by this organization. The FDA requires all products go through testing by a third-party lab, making sure there are no harmful adulterants, contaminants, bacteria, heavy metals, or synthetic additives. The AKA is doing its part through advocacy and lobbying, and pushing the FDA to regulate kratom products just as they regulate other dietary supplements in order to remove adulterated kratom products from the market. Read more about kratom quality practices here.

Kratom alkaloids can withstand temperatures of 212 degrees Fahrenheit or more — we’ve done the tests to prove it!

Many people believe that heat kills the alkaloids in kratom since it’s a natural plant. Knowing this myth, Super Speciosa went to work in the lab. First, we tested batches of kratom for its alkaloid content. We then boiled water and allowed our kratom tea to steep for 15 minutes. We sent the sample of the finished kratom tea liquid to our third-party lab, and found that the tea still retained 70% of the original alkaloids. Of course, some of the alkaloids are still in the actual plant material, so the 30% loss was expected.

This test shows that the molecular composition of kratom can withstand higher temperatures.

As kratom gains in popularity, more vendors are providing kratom products of varying quality. Find out about good manufacturing practices and the importance of quality standards.

There's no better way to determine the quality of kratom than third-party laboratory testing. Find out about the importance of lab testing.